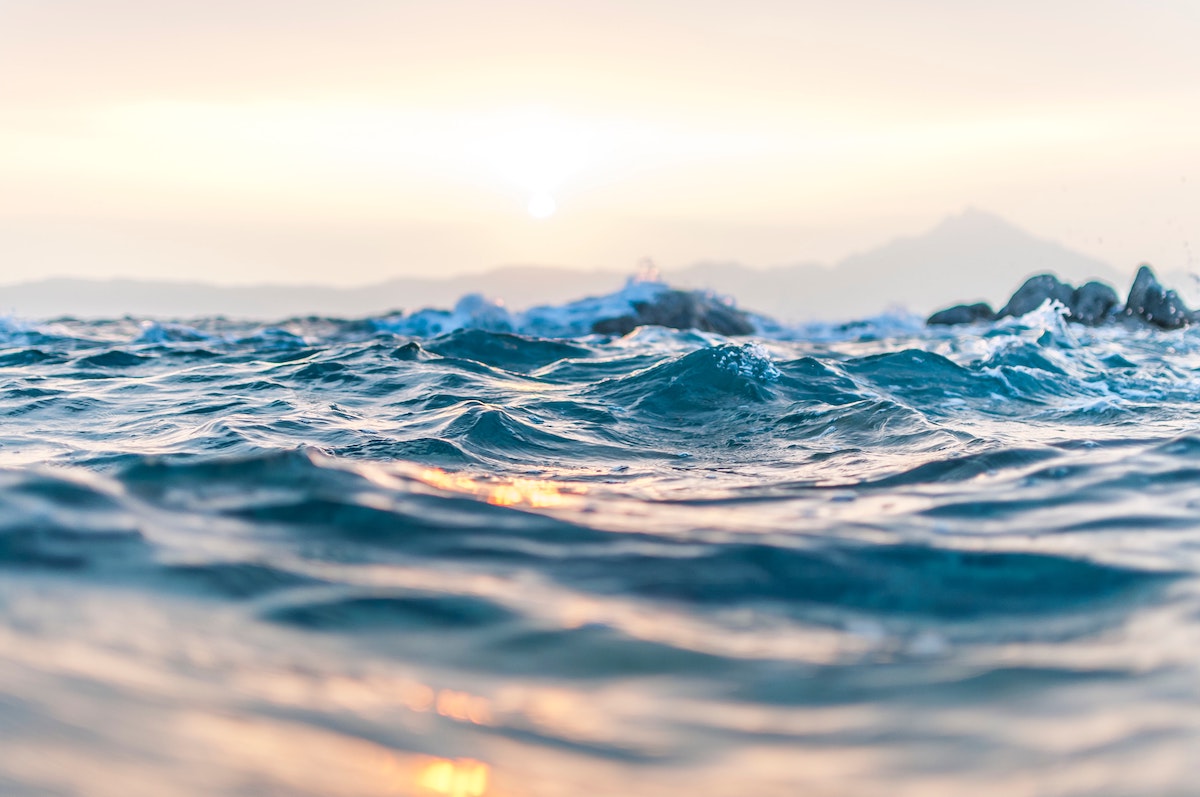 After the success of the first autonomous robotic system designed to search for, identify, and collect seafloor litter, Venice Lagoon Plastic Free is proud to be the only NGO and the single Italian partner of this new challenging European enterprise carried out by a consortium of European researchers committed to developing a team of robots to collect litter from the surface and deeper regions of the Mediterranean. The teams responsible for the Horizon 2020 SeaClear project have announced that they have expanded their consortium and received funding to begin follow-up work to further develop the robotic system and holistically address the issue of marine litter through the project: SeaClear2.0  – Scalable Full-cycle Marine Litter Remediation in the Mediterranean: Robotic and Participatory Solutions. SeaClear2.0 will go beyond technological innovation, integrating cutting-edge technologies into a comprehensive approach that engages communities in finding solutions to marine litter pollution, increases waste value, and contributes to science-based policy making. 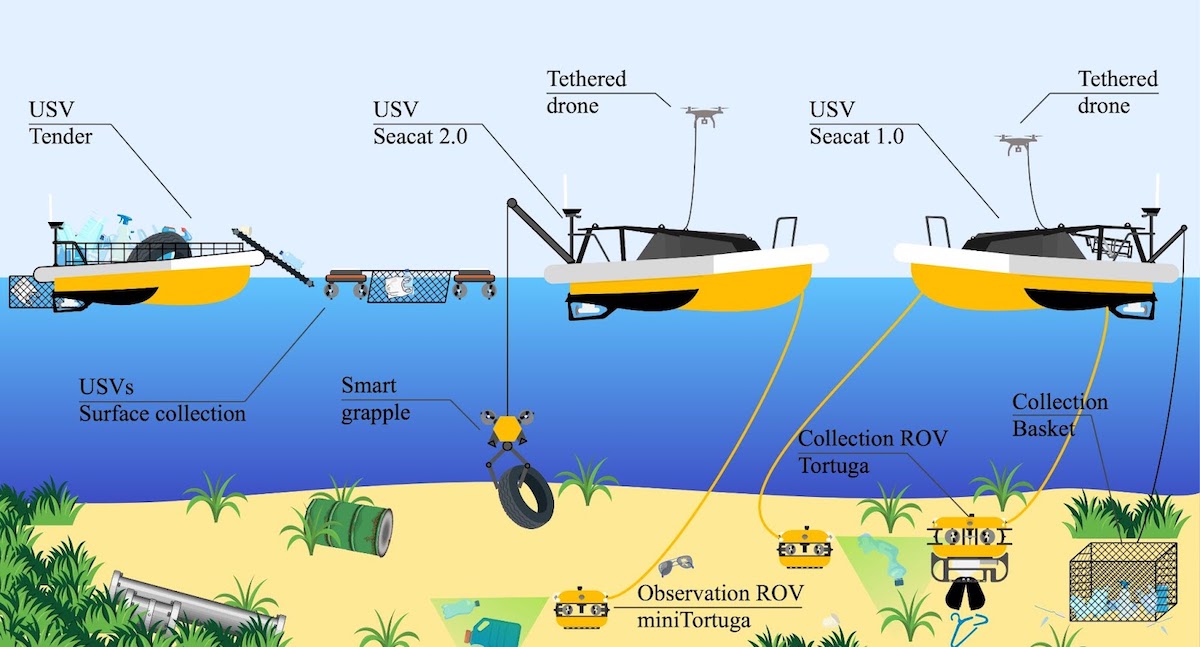 SeaClear 2.0, like its predecessor, attempts to use robots to combat one of the world’s most serious environmental issues: marine litter. Cleaning it up using divers poses danger to human lives and is economically overwhelming.

The new EU-funded initiative will deploy a fleet of smart robots to identify and remove marine debris, building on the success of SeaClear 1.0. The system employs a combination of aerial drones, underwater rovers, autonomous surface ships, and custom-built robotic grippers to do this. Using artificial intelligence, robots can autonomously identify, locate, and collect litter on their own. The team is aiming to significantly expand the capabilities of the SeaClear 1.0 system (shown on the right of the concept figure above), which is already passing tests with flying colours.

The technological core of SeaClear 2.0 is a heavily upgraded robotic system for automated litter collection, which can go deeper, lift heavier litter, and tackle surface litter (see the concept figure above, left and centre). The project starts by improving sensing with high-resolution sonar, as well as other types of sensors like microplastic and electromagnetic sensors. A smart, maneuverable grapple will be developed that can pick-up larger litter, such as tires, bicycles, or pipes. To carry the bulkier, heavier litter, the scientists will design a new tender with flexible partitioning chambers for different litter fractions, similar to adjustable drawer dividers. Surface litter will be collected via an autonomous mobile team that can work in confined and shallow areas. This new system will be able to work in tandem with the SeaClear 1.0 version.

With nearly half a billion tonnes of plastic entering European seas every year, technological solutions to identify and remove litter must be coupled with social interventions to prevent and reduce the production and release of litter by citizens. SeaClear2.0 will empower and activate citizens through engagement activities including geographical storytelling, a gamified litter-reporting app., clean-ups, exhibitions, competitions, and artistic installations. The team will also propose better sorting and recycling solutions to increase the value of the litter collected, and will work with local communities to develop novel policy recommendations to address policy gaps.

The new, improved system will be demonstrated in 3 full-scale demonstrations and 3 pilot tests throughout the Mediterranean. In addition, the project will fund 5 subprojects to validate parts of the system and approach in other regions of the Mediterranean basin.

Within the frame of the project, VLPF will develop the gamified public-engagement app and portal. VLPF, considering their involvement in the co-development, testing and validation of MAELSTROM and In-No-Plastic apps for marine litter clean-up and social mobilisation, was considered as best suited to upscale the digital solutions starting from Venice and beyond. The SeaClear 2.0 Portal and App will be developed mostly based upon experience from the In-N0-Plastic and ‘Ghost Boats’ projects. The portal will provide a front end for project operators and public users for the data collected by the app. The app will identify, geo-localise and track macro litter uploaded by infield actors via smartphone: location, volume, weight and type of material found/removed, pictures/videos, date, possibly number of participants, teams deployed, etc. Gamification and incentivisation will be conducted in terms of tasks (target amount of pieces found/collected, overall weight, etc), incentives (badges, leaderboards, level, scores, quests, prizes, certificates, plastic footprint outputs etc.) and data diffusion on social media. VLPF will validate the portal and app in the pilot site of Venice and its lagoon by working with local users (NGOS, CSOs, rowing clubs, tourism and recreational sector) to organise and roll out dedicated events.

The SeaClear 2.0 project will start on January 1st 2023, and will run for four years. The kick-off meeting has already been planned to take place in Delft, the Netherlands on the 14th of February, 2023. This project receives funding from the European Union’s Horizon Europe programme under grant agreement No. 101093822. The total budget of the project is €9,086,305.00, out of which €7,971,863.50 is funded by the EU. The consortium consists of 13 partners from 9 countries, with a blend of expertise in public engagement, policy-making, robotic perception and control, artificial intelligence, marine, and diving technology and operations, and litter sorting and recycling: Delft University of Technology (Netherlands, project coordinator), Regional Agency Dunea (Croatia), Fraunhofer (Germany); Hamburg Port Authority (Germany), Isotech (Cyprus), M.Danchor (Israel), Subsea Tech (France), Técnicas y Obras Subacuáticas (TECNOSUB) (Spain), Technische Universitaet Muenchen (Germany), University of Dubrovnik (Croatia), Technical University of Cluj-Napoca (Romania), Veolia (France), and Venice Lagoon Plastic Free (Italy).

Find out more about our other EU projects here

eu grant eu project horizon europe project robotics seaclear seaclear 2.0
We use cookies on our website to give you the most relevant experience by remembering your preferences and repeat visits. By clicking “Accept”, you consent to the use of ALL the cookies.
Cookie settingsACCEPT
Manage consent