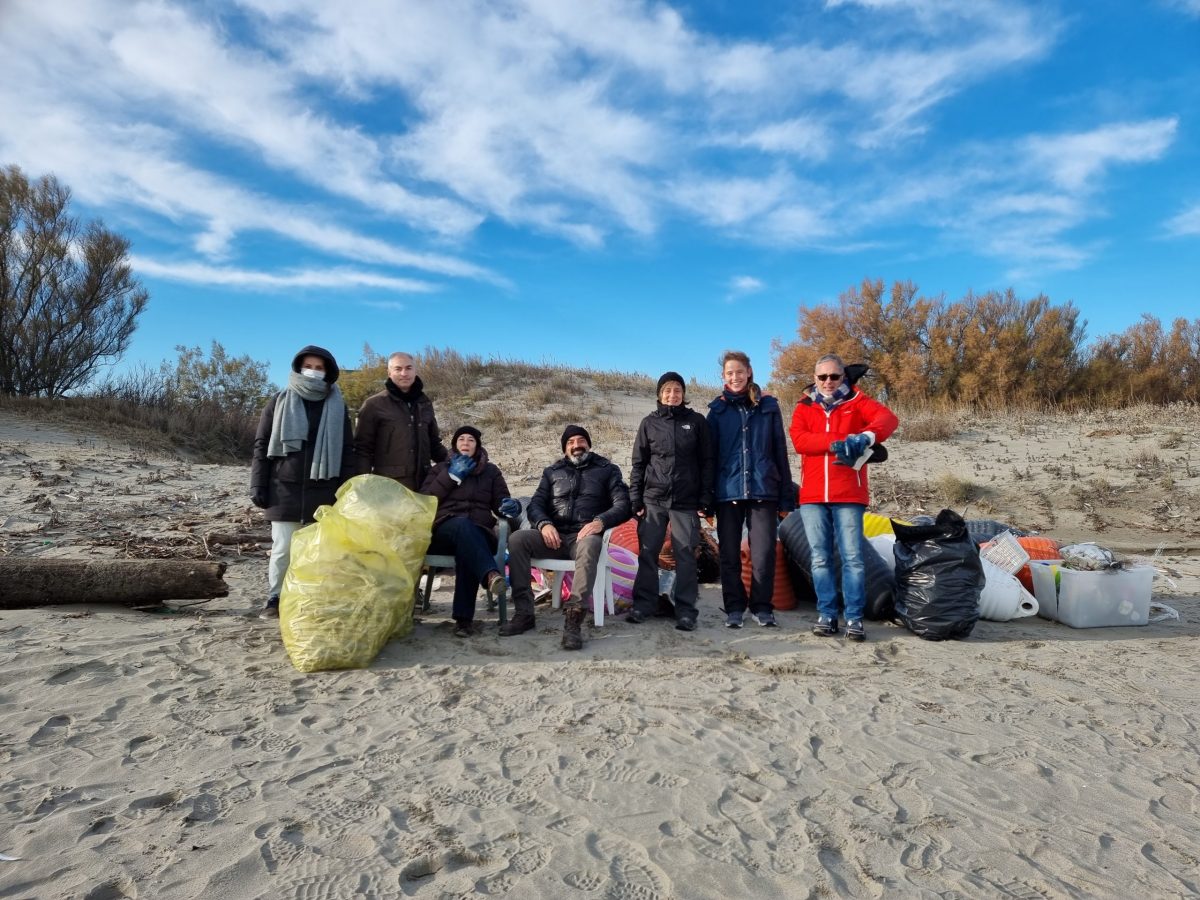 Venice Lagoon Plastic Free organized an experimental monitoring, clean-up and recycling of macro-marine litter, particularly plastics, on Pellestrina island, a narrow strip of land between the Venetian lagoon and the Adriatic Sea. The event took place on December 11th in collaboration with Legambiente, as part of the European projects H2020 MAELSTROM and InNoPlastic.

The term macroplastics refers to waste larger than 5mm, a serious threat to turtles, fish and sea bird species that often get entangled or suffer other injuries confusing them with food.

A key element for the success of the event was the app developed by Venice Lagoon Plastic Free in collaboration with Gees Recycling within the MAELSTROM project. The app, in an advanced stage of testing, allows the identification, geolocalisation and characterization of waste according to an international codification. Moreover, its tracking functionality allows the traceability of the litter from its removal to transportation and later mechanical and chemical treatments, somehow certifying the overall passages carried out to meet a full circularity of the plastic waste.

During the clean-up 924 kg of waste was collected, mainly composed of buoys, inflatables, styrofoam, single-use plastic bottles and caps and food packaging. The Pellestrina coast is sadly characterized by these and other types of macroplastics that can be found on the beach, abandoned by uncivilised locals and visitors, brought by marine currents, or stranded during coastal storms. 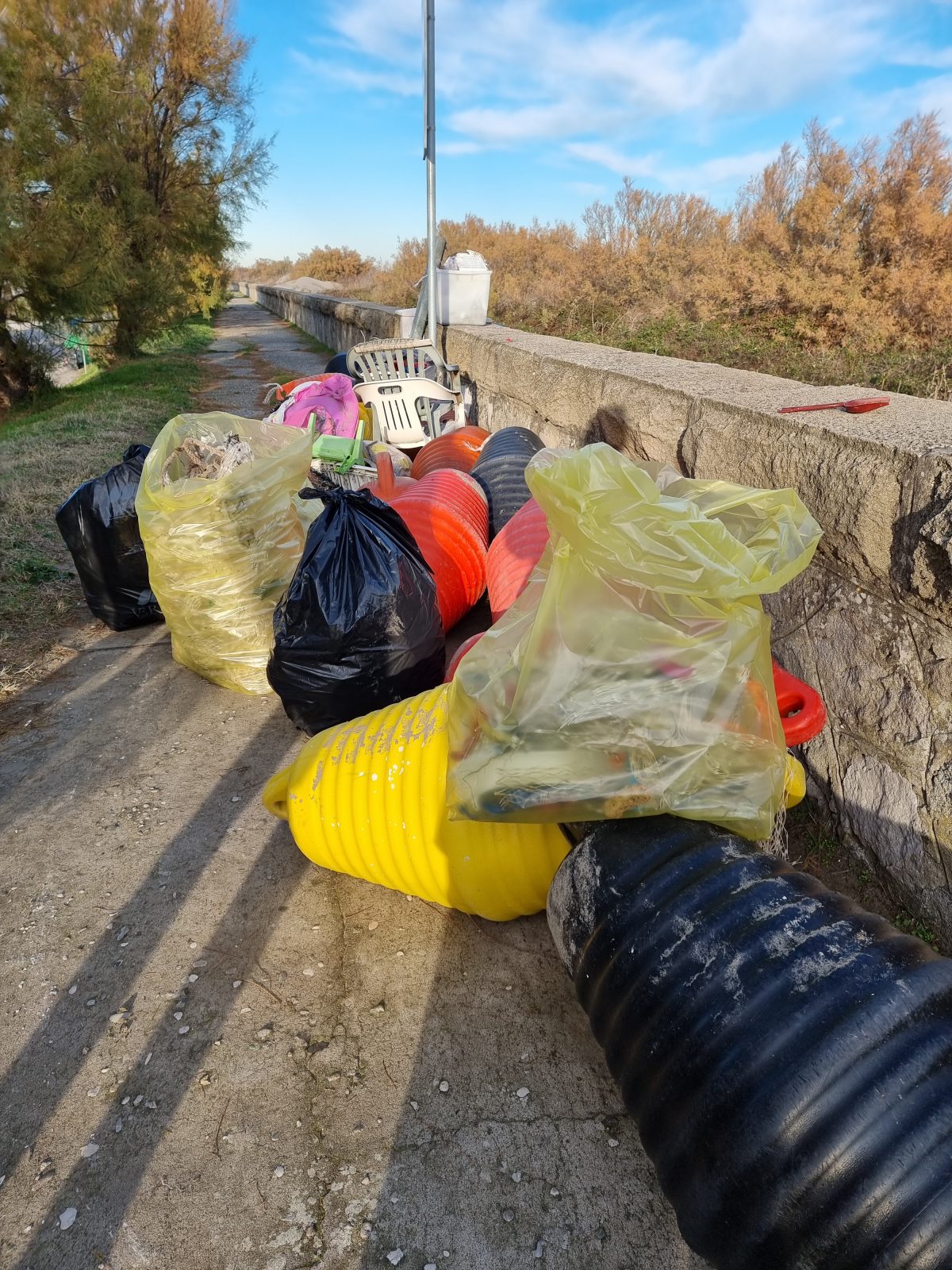 A particularly dramatic picture emerges from the beach marine litter monitoring: out of a total of 1944 objects found in just 100 meters of the beach, 896 (46%) were shell farming nets. This is shocking, especially considering that they ironically come from an economic sector that is nourished by the sea, but despite that it so strongly contributes to pollute it.

As shown by the Plastic Litter in the Adriatic Basin report shared by Greenpeace last June, waste deriving from fishing activities represents, together with single-use packaging, the main cause of plastic pollution in the Adriatic Sea. Globally, an estimated 640 tons of shell farming nets and other fishing gear end up in the sea, which is about 10% of the overall marine plastics litter. What’s worse is that only a small part of these objects is recycled: it is estimated that in Europe it doesn’t exceed 1,5%.

“The gravity of the situation resulting from plastic pollution requires the immediate cooperation of fishermen and the reinforcement of mitigation actions undertaken by Venice municipality for fishing waste disposal”, said Davide Poletto, executive director of Venice Lagoon Plastic Free.

“It’s clear how such a high density of fishing waste in the Pellestrina area, as well as in other Italian coastal areas, indicates a persistent and unsolved problem. It seems like local mussel farmers intentionally leave with extreme superficiality massive quantities of shell farming nets made of polyethylene and polypropylene in the marine environment, considering that the estimated time for their degradation is of 200 years. These thermoplastic materials could have a recycling potential that Gees Recycling from Aviano will test in the next months. Moreover, there are alternatives made of natural and biodegradable materials that we should test and employ on a large scale. They’re more expensive than the plastic ones, whose real cost and impact don’t seem however to worry to the right extend.”

clean-up innoplastic macroplastic maelstrom marine litter pellestrina plastic free plastic pollution plastic waste single use plastic venetian lagoon venice
We use cookies on our website to give you the most relevant experience by remembering your preferences and repeat visits. By clicking “Accept”, you consent to the use of ALL the cookies.
Cookie settingsACCEPT
Manage consent