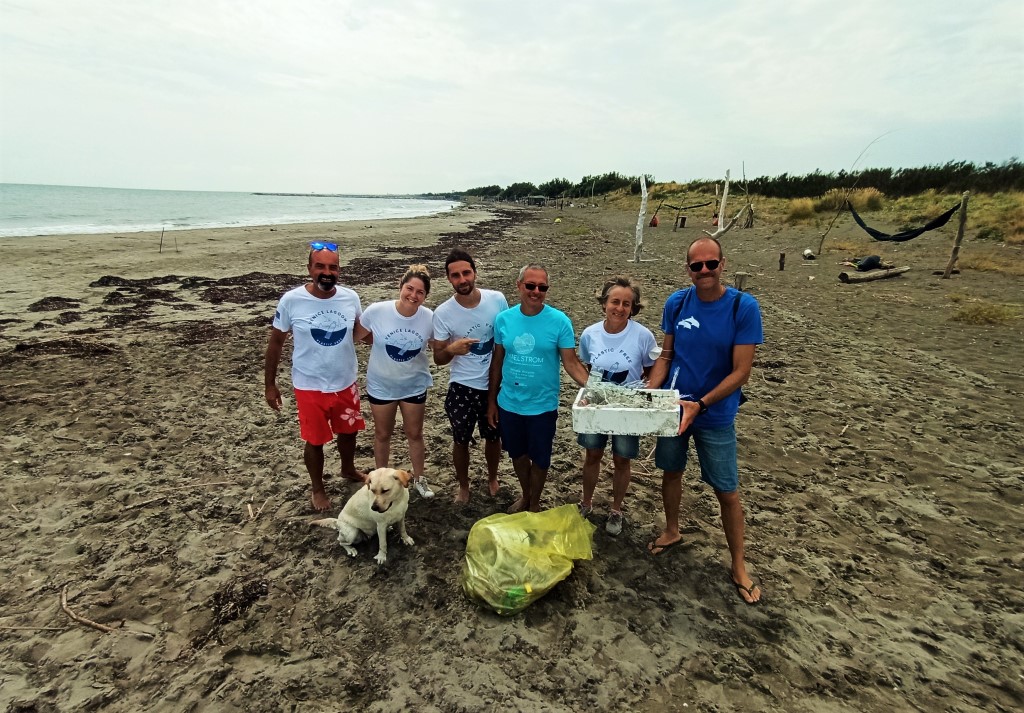 Facing challenging weather, a combined team composed of Marevivo and Venice Lagoon Plastic Free volunteers sailed from Venice towards San Pietro in Volta on 27 July. Immediately upon arrival, they found a high concentration of various plastic waste stranded onshore. Armed with gloves, pickers, waste bags and the MAELSTROM project derived app, in its beta version, they started to assess and clean one section of public beaches in the proximity of the urbanized areas of Porto Secco and St. Pietro in Volta.

In particular, the volunteers recorded and collected massive quantities of plastic nets used for mussel farming, but also personal hygiene objects, bottle caps, detergent containers, balloons, ribbons, ropes, single-use cups and plates, towels, toys and large quantities of non-defined plastic fragments in various colours mixed with sand, stranded by the forces of winds and currents, or brought and dropped by vacationers in the area.

We have monitored an area of 100 meters to test the functioning and applicability of the app currently being developed within the EU H2020 project Maelstrom, designed for monitoring marine litter according to the European protocols. The app facilitates our work on-field significantly by giving us real-time scientific data. The app also includes several specific functionalities for the execution of small and large-scale clean-ups.

The concentration of plastic pollution was so high that we managed to collect seven bags (carrying 70 lit each) for an overall weight of 50 kg in a short time. The litter was finally disposed of in the appropriate trash containers of VERITAS (the local waste management authority) for further treatment.

Marevivo and our Association keep up their cooperation on the occasion of the  World Clean-up Day (18 -19 September), enriched with the participation of a large number of volunteers empowered with an advanced version of the Maelstrom app, thanks to the fieldwork at San Pietro in Volta.

cleanup marevivo marine litter monitoring plastic free plastic pollution san pietro in volta venice lagoon
We use cookies on our website to give you the most relevant experience by remembering your preferences and repeat visits. By clicking “Accept”, you consent to the use of ALL the cookies.
Cookie settingsACCEPT
Manage consent